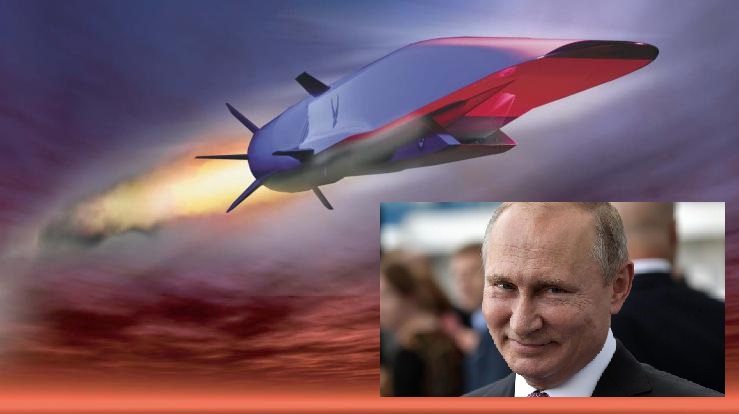 Imagine Putin as a poker player who knows that he has the winning hand – deployable, nuclear capable, hypersonic missiles. The United States does not have them and cannot intercept them.

Bullets fired by most pistols do not break the sound barrier and they frequently miss their mark. Bullets shot from rifles are more accurate and some reach Mach 2 – twice the speed of sound. Supersonic missiles reach up to Mach 5, so supersonic anti-missile missiles can intercept supersonic ICBM’s. But even Russia’s S-400 anti-missile system, the best in the world, could not touch a hypersonic missile. Russia’s claim that one of its nuclear-capable hypersonic missiles reached Mach 27 (20,010 mph) and landed in its targeted kill zone, has not been disputed. But even if that missile ‘only’ reached Mach 13, on its way down from the stratosphere it was singing MC Hammer’s Can’t Touch This.

A good poker player hides his confidence while playing a winning hand. He ups the ante with moderate bets and even smaller raises – as if he is worried – hoping that several other players will think they have better cards or suspect that he is bluffing.  Putin is not playing that way. He is not hiding his confidence because he is not playing a game. He is hoping to convince his opponents to fold on the first round of betting by showing his cards – by laying them down, face-up, along the borders of Ukraine.

Because he is stupid? No, because he does not want all-out war with The West. His ‘Russia-does-not-want-war’ mantra is sincere – but he is not going to underplay his winning hand and he has spent too much time thinking about nuclear war to think of it as ‘unthinkable’. With regard to the size of the pot, Putin might settle for safeguarding ‘his’ people in Donbas and Luhansk and securing a land corridor to Crimea. Seventy seven percent of Crimeans, and most people in Donbas and Luhansk, are native speakers of Russian. They do not speak Ukrainian, and they prefer to align with Russia. Even the President of Ukraine, Volodymyr Zelensky, is only now learning Ukrainian. His native tongue is Russian.

The United States started the Cold War when it should have respectfully acknowledged that Germany lost World War II on Russian soil at enormous cost to the Soviet Union (all-cause U.S. deaths <500 thousand, all-cause Soviet deaths >26 million). And now The West is again exercising knee-jerk disrespect, but this time at its own peril. NATO should instead realize that this time, for the first time, it is holding the worst possible poker hand – a second-best hand in a winner-take-all game. Frantic bluster about severe economic sanctions and troop movements to eastern European nations other than Ukraine are feckless deterrents. If NATO calls Putin’s hand, NATO’s four aces will lose to Putin’s royal flush. The West can cut its losses by folding early, or it can play, then bet good money after bad, and then lose big-time.

Korea, Vietnam, Iraq, Afghanistan, Syria and Libya were military lightweights compared to the United States and its allies, but America’s only unfettered military victory since World War II was on the tiny island of Grenada. Russia is in NATO’s weight class and mutually assured destruction is currently out of balance. Hypersonic missiles are vastly faster than a speeding bullet and highly maneuverable. Compared to supersonic missiles, hypersonics are a rifle instead of a pistol. And as China has demonstrated with its new hypersonic glide vehicle, hypersonics can float like a butterfly and sting like a bee. Until The West has at least equivalent technology, it should not poke The Bear or China.

Is that truth too hard to swallow? It certainly flies in the face of America’s self-image as The World’s Only Superpower, but that self-image has created a forthright rival – the burgeoning relationship between Moscow and Beijing. Putin and Xi have become BFF’s (Best Friends Forever) and the US/NATO block has served as the Putin-Xi matchmaker. Until and unless NATO regains military superiority, or at least parity, the alternative to respecting Russia and China may entail bringing a knife to a gunfight.

Because the United States has a vastly stronger economy than Russia and is likely to stay economically ahead of China for the next 20 years, Washington should take Leon Hadar’s advice:

The choice that Washington now faces is between continuing to strive for strategic [military] dominance — or working together with other powers, including Russia and China, to contain threats to the international system. In that case, the United States will achieve primus inter pares (first among equals) — which is the next best thing to being number one.

Indeed, it is time for some profoundly creative thinking. NATO should be dissolved so that Russia and China can be invited to join a new alliance – POETO (Peace On Earth Treaty Organization) – an alliance that could live up to its name instead of clinging to NATO’s misnomer and its overbearing arrogance. That would require recognizing Russian sovereignty over Crimea (an established reality), endorsing the autonomy of Donbas and Luhansk, and supporting creation of a land corridor from the Donbas basin to Crimea. Although it grieves the Unites States, all NATO nations formally recognize Chinese sovereignty over Taiwan by virtue of recognizing the PRC while not recognizing the ROC. With good will, the Uighur issue, which has been festering since before the Kumul Rebellion (1931-1934), could be resolved.