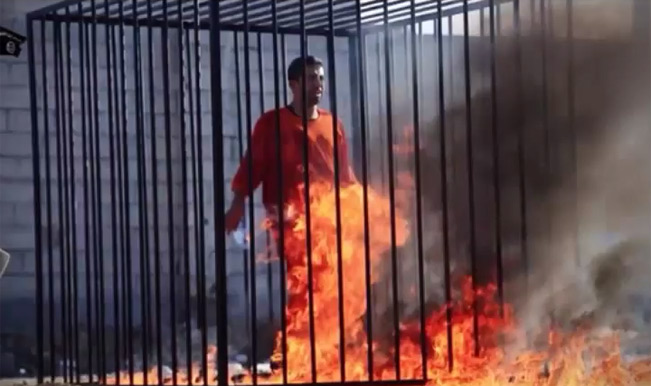 When we revile ISIS, we should remember the magnitude of our own massive premeditated murders and our own original sins.

American pilots who dropped napalm on Vietnamese and Cambodian villages did not target noncombatants, but they knew that hitting their targets would cause collateral damage … burning alive noncombatants, including women and children.  Given that knowledge, those pilots and their chain of command all the way to Lyndon Johnson and Richard Nixon were guilty of premeditated killing, though perhaps not premeditated murder. Same goes for the victims of Agent Orange.

Perhaps not premeditated murder because of the possibility that such horrible means were required to accomplish an end that could justify those means.  Was that the case?  In 1929, citing the spirit of the US Declaration of Independence, Ho Chi Minh appealed to Woodrow Wilson to back his effort to free Vietnam from colonial rule.  In 1945, citing the Atlantic Charter, he made the same appeal to Harry Truman.  If Wilson’s and Truman’s sentimental and ultimately immoral allegiance to French colonialism had not precluded support of what could have become a beacon of democracy and a respectable ally in southeast Asia, thousands of Vietnamese and Cambodian children would not have been burned alive by US pilots.  Wilson’s and Truman’s dismissal of Ho Chi Minh was the original sin of the Vietnam War.  The means only delayed the end.  The end did not justify the means.

Napalm’s viciously successful replacement, MK-77, was used against noncombatants in Iraq and Afghanistan in violation of the 1980 United Nations Convention outlawing the use of aerial incendiary bombs against civilian populations, including military targets in civilian areas.  Because MK-77 contains it own oxidizing agent and white phosphorus, it burns people alive even after water is poured onto their burning flesh.  Though no body counts have been published, it seems certain that more noncombatants than combatants were killed by MK-77 when the city of Fallujah was fire-bombed in 2004.  Referring to MK-77 as napalm, US Marine Colonel Randolph Alles quipped “The generals love napalm.  It has a big psychological effect”.  So the US used MK-77 as a weapon of mass destruction in Fallujah, and as a weapon of mass terrorization in many other parts of Iraq, in its effort to defend the world against terrorism and weapons of mass destruction.  The end of hostilities in Iraq is not in sight, but unless Iraq miraculously returns to being the Cradle of Civilization, such means cannot be justified.

The Jordanian pilot burned alive by ISIS was guilty of premeditated killing.  Whether that pilot’s premeditated killing was also premeditated murder depends on whether his actions were required to accomplish an end that would justify such means.  Jordan joined a “coalition of the willing” against ISIS because Jordan’s government is maintained by the Zionist entity – the US of A.*  President Obama could not have been more wrong when he asserted that “No God condones terror”.  The god of Judeo-Christianity commands terror.  Our original sin is in our Bible.  It has nothing to do with Adam and Eve.  It has everything to do with commandments to murder or enslave non-Judeo-Christians.

ISIS is horrible but understandable.  We should revile ISIS, but we should not demonize ISIS.  And when we revile ISIS, we should remember the magnitude of our own massive premeditated murders and our own original sins … the most premeditated, and not even pseudo-defense-related, of which was the recreation of Israel … a nation whose god commands it to destroy non-Judeo-Christians if they happen to have been living on land that Judeo-Christianity claims to have been given to Jews by their god.  That end is so offensive, in and of itself, that it does not have the potential to justify any means.

As Obama made his ignorant assertion that “No God condones terror” and proffered his widespread misunderstanding of “Love thy neighbor,” Israel was expanding settlements in the West Bank against a backdrop of Israeli settlers spitting on the family of a 16-year old Palestinian boy that settlers had burned alive. Those settlers were following their god’s commandment to “make them as a blazing oven when you appear … and fire will consume them. You will destroy their offspring from the earth, and their children from among the sons of men” (Psalms 21:9-10).

* The tail does not wag the dog. Israel is the ultimate symptom of American Zionism, not the cause of American Zionism.  Americans tend to forget that long before they recreated Israel, their forefathers thought of the United States as God’s New Israel and Native Americans as Canaanites who should be destroyed:

“It has been often remarked that the people of the United States come nearer to a parallel with Ancient Israel than any other nation upon the globe. Hence OUR AMERICAN ISRAEL is a term frequently used; and common consent allows it apt and proper”